'Shadows of War' tells of the first Memorial Day in Boalsburg 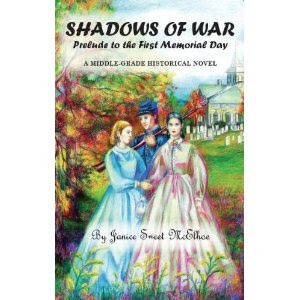 I grew up in Boalsburg, Pa., where it's a known fact - one that I learned as a student at Boalsburg-Panorama Elementary School -  that the tiny historic village is the birthplace of Memorial Day in America. Apparently, however, there are a bunch of other U.S. towns that make that claim to fame.

Setting the record straight in her novel "Shadows of War: Prelude to the First Memorial Day" (Crandall Publishing, 112 pp., 2008) is Boalsburg resident and author Janice Sweet McElhoe, mother of Jennifer McElhoe, a classmate of mine at State College Area High School.

I ran into both Janice and Jennifer McElhoe at BookFestPA in State College on July 14. They were promoting "Shadows of War" in a tent with a number of local authors up behind Schlow Centre Region Library.

"Shadows of War" is a historical novel intended for middle-school students, ages 9 to 12.

"The novel enables young readers to visualize the impact the Civil War had on the small village of Boalsburg, Pennsylvania. It provides them with an understanding of the magnitude of the events that eventually led to the first observance of Memorial Day," wrote Tabitha Berg in a Sept. 2008 article for eNewsChannels.

"Author Janice Sweet McElhoe, Ph.D., has written a story that young readers can relate to. In the novel, brave teens and classmates at the Boalsburg Academy trade their books for guns and march off to war, while the young women in the class are left behind."

The reader of "Shadows of War: Prelude to the First Memorial Day" will be able to visualize the impact of the Civil War on one small village in Pennsylvania and feel the magnitude of the events that eventually led to the first observance of Memorial Day. In the story, brave classmates at the Boalsburg Academy - 15, 16, 17 years old - trade their books for guns and march off to the Civil War, while the young women in the class are left behind. This tale is filled with loyalty and compassion for family, community, and country; qualities that continue to have implications for young people today.


The book is available for purchase at the Boalsburg Heritage Museum for $7 as well as on Amazon.com

Download an audio prelude to book, courtesy of WPSU and NPR, here.


Boalsburg native Janice Sweet McElhoe, author of "Shadows of War: Prelude to the First Memorial Day," has enjoyed a lifetime as an educator, first as a teacher in the public schools of Pennsylvania and later at Wilson College and Temple University, where her duties included teaching a course in children’s literature to future educators. As a child, growing up in Boalsburg, PA, McElhoe heard the poignant stories, of that small village, during the Civil War. It seemed inevitable that the educator from Boalsburg would find a way to share Emma and Sophie’s intriguing story of love, loyalty and compassion.
McElhoe is also the author of “Sarah’s Story: A History of the Boalsburg Heritage Musuem” now in it’s second edition at the Boalsburg Heritage Museum.

Learn more about Boalsburg's Memorial Day history here.
Posted by Unknown at 9:30 AM