North Coventry resident Scott Armstrong, whom I met years ago while he was working as controller of The Mercury, has followed his love of history to pen a book, "Russian Snows: Coming of Age in Napoleon's Army" (Red Barn Publications, Oct. 2011, 169 pp., paperback, currently $8.96 on Createspace)

When Armstrong first contacted me about his book, a historical fiction novel for middle-grade readers (12-16), I was a bit surprised. I had no idea the now publisher of Parents Source was a history buff OR a writer. In fact, I soon learned, history was his major in college. Armstrong has furthered his interest in history by continuing to devour history books and participate in living history - American Revolution - events. 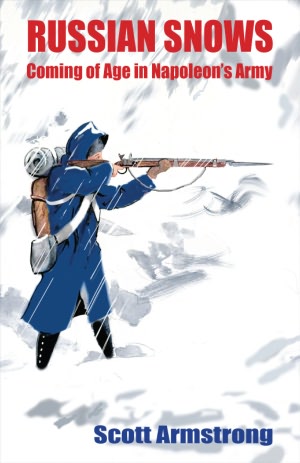 "Russian Snows," Armstrong's first novel, came about as he was taking part in  a writing exercise with his 15-year-old daughter, Helen. While participating in National Novel Writing Month (NaNoWriMo) last year with Helen, whom he calls the "real writer" in the family, Armstrong took up the challenge to write 50,000 words in November 2010. He found that once he completed those 50,000 words, he was only halfway through the story he wanted to tell.

Less than a year after embarking on the project, Armstrong decided to self-publish the work, which he successfully did via his own publishing company, Red Barn Publications, on Oct. 19 - which, he tells me is the 199th anniversary of Napoleon's departure from Moscow.

The story follows a 13-year-old French boy, Henri Carle, who finds himself with Napoleon's army as it invades Russia in 1812.

The author said he "drew on a lifetime of American Revolutionary war reenacting, travel through Europe, and extensive reading on a wide range of topics, to bring Henri's story to life. Armstrong's goal was to write a story that would appeal to both his 15-year-old daughter, Helen, and his son Nathaniel, 11.

Henri is just 13 when his father encourages him to enlist with the army, to keep an eye on his older brother, Luc, and to make sure he has something to eat and a place to sleep - necessities that cannot be guaranteed at home.

Henri reluctantly and tearfully follows his brother, Luc, to training and eventually on the road to Moscow. Like any other kid his age Henri makes friends - and enemies - among the ranks. Through short chapters the author tells of Henri's daily trials and successes. He gets booted from the army for being too young and small but finds work in the town near his brother's camp, and later as a sort of footman for an officer then as a messenger of sorts. Henri, through hard work and loyalty, earns himself a spot among the ranks with Luc. Armstrong gives a detailed account of the boys' journey north to Russia with the army.

"The column left the battlefield around noon and headed east along the Smolensk-Moscow road. We were following the Russian army, but they were pretty far ahead and apparently didn't feel they should stop and wait for us to catch up. In their wake, they left nothing of use. Houses and crops were burned, bridges had been destroyed and livestock was gone."

Henri, older, crafty and more world-weary at 14, is finally accepted into the army to fight along with his brother, and after a grueling march with little to no food or water, they finally make it to Moscow. After arriving at the city Henri and Luc and the rest of the army find themselves in trouble. The army soon finds itself retreating, eventually with an increasingly more war-hardened Henri leading the way.

The author says "Henri ends up in the ranks and learns to shoulder the responsibility of a man as the army deteriorates around him. While fictional, the story follows actual events and incidents from the campaign and gives a view through the eye of the common soldier."

Armstrong's story is a quick and enjoyable read for those who simply love a good story as well as for lovers of history. Through his well-written prose, the author stays true to the facts while relating an engaging story of brothers, friends and comrades that will appeal to both kids and grownups.

Armstrong became interested in Napoleon's ill-fated invasion of Russia while taking a college course on the French Revolution and Napoleon. He is publisher of a family activities and resource guide, Parents' Source (www.ParentsSource.com). He met his wife, Sandie, while re-enacting the siege of Savannah during the Bicentennial celebration. Later, they both participated in a parade in Paris on the Champs Elysees as part of a re-created French regiment during the 200th anniversary commemoration of the end of the American Revolution. Learn more about the author and his book on his website, www.RussianSnows.com

MK:  How did your son and daughter like the book?

SA:  The book is written for an audience 12 - 16 years old although anyone who enjoys historical fiction would enjoy it. My daughter, 15, liked it. My son, who just turned 11, is a little too young although I did read him parts of the original manuscript. I'll read it with him when he's ready.

MK: Do you plan to write another? (Or have you already?)

SA:  I wrote the sequel during National Novel Writing Month (November). It is called Paris Winter: Fall of the Empire and has many of the same characters as Russian Snows: Coming of Age in Napoleon's Army.  The story takes place in France during the time of the 1812 invasion of Russia all the way up to when Napoleon abdicates in 1814. Only the first draft is done and will need much editing and re-writing before it is ready for publication.

MK: How have people responded to the book?

SA:  I have only had positive responses to the book. One of my mother's friends read the book and said her father had been in the Czech army at age 14 (like Henri in the book) and it helped her to understand what he must have gone through.

MK:  Any interest from schools as having your book as part of the history curriculum?

SA: I have not formally approached schools yet about Russian Snows. I'll be doing that in the near future. Two schools have contacted me that are interested in having me talk to their classes on the history and the writing process. I will be giving a talk on the Russian campaign of 1812 to a church Men's Group in January and I'll be doing a session for a continuing education group as well. If any schools or organizations (book clubs, libraries, bookstores, history clubs, retirement homes, etc... (anybody who needs a speaker) are interested in having me talk to them about Napoleon's Russian campaign (the 200th anniversary is in 2012) or how I went about writing the book (or both), I'd be happy to do so. I can be reached at ScottArmstrong@RussianSnows.com.

MK: Have you and your family visited Moscow/ the area of the march?

SA:  I have not visited the area of the march. But, I have been to Paris and was even in a parade on the Champs Elysees (like in the book). I grew up doing Revolutionary War re-enacting and used those experiences to feel what it might have been like for the characters of the book.

MK: Would you suggest to a new/wannabe writer participating in the National Novel Writing Month, as you did?
SA:  I participated in NaNoWriMo last year as a way to do something with my daughter, who wrote her own book during that time. In the 2011 contest, only 14% of the people who entered reached the 50,000 word goal. It takes a lot of discipline to churn out the words day after day and keep up the pace for a whole month. It is also important to turn off the "inner editor" while writing to keep from getting bogged down. I would recommend it to anyone who wants to write a novel. If successful, someone would end up with 50,000 written words at the end of November and that is a great start for any book.

Copies of Russian Snows can be purchased at Amazon.com (in paperback or as an ebook for Kindle) or through www.RussianSnows.com. Russian Snows is also available for the Nook e-reader through BarnesandNoble.com.
Want to win a copy?

The author has provided an autographed copy of "Russian Snows: Coming of Age in Napoleon's Army" for me to give away to a reader. If you would like to win it, email me at mkaras@pottsmerc.com with your mailing address or leave the information in  a comment on this blog. The winner will be selected at random and notified by email.
Posted by Unknown at 1:30 PM